Looking at the beautiful autumn colors and preparing for the Trick-or-Treaters made me think of past years when our children were little.  They were so happy to dress up in costumes, carve pumpkins, and  to embrace Halloween in general. I miss those years.

It's fun when the little children from our neighborhood come to our door.  Unfortunately not too many came this year because of the weather, but there were a few.  One little monster actually scared me. When I opened the door, I looked down at a very scary green mask.  He was soooo little!  I jumped when I saw him and said, "Oh, you scared me."  The parents standing a  short distance          away laughed.


MY KIDS FROM PAST HALLOWEENS

Posted by Altrusa International of Evansville by Lola Perkett at 5:53 PM No comments: 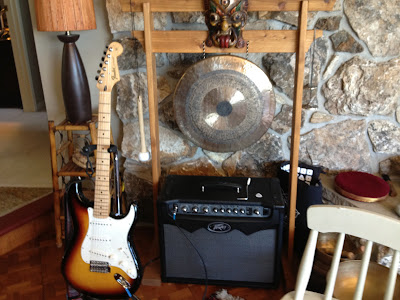 These pictures were taken at my brother in-law's place out in Washington.  What a beautiful garden! 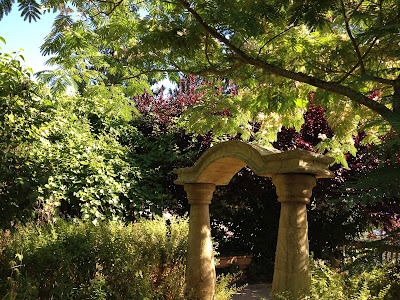 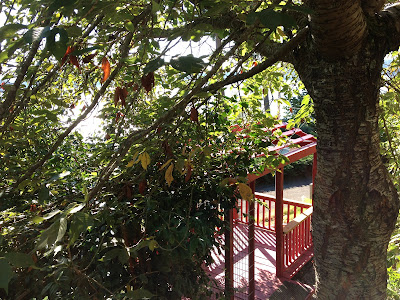 When you call my name it's like a little prayer
I'm down on my knees, I wanna take you there
In the midnight hour I can feel your power
Just like a prayer you know I'll take you there 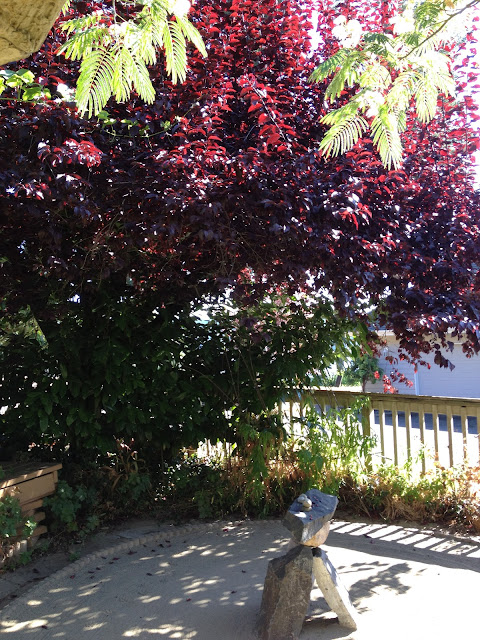 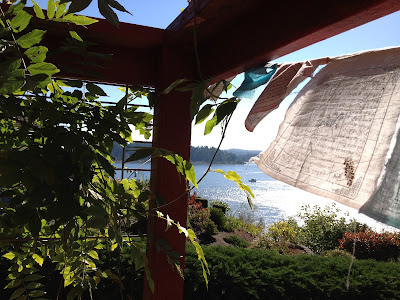 Posted by Altrusa International of Evansville by Lola Perkett at 7:06 PM No comments:

Addie May Hirschen, a storyteller from Indianapolis, entertained young and old under a tent on the lawn of Willard library on July 28th, the final day of “Beyond the Beanstalk”.   Wearing a long blue- green dress along with a golden crown, she told interesting stories with expression, and used riddles as well as puppets to captivate her audience. 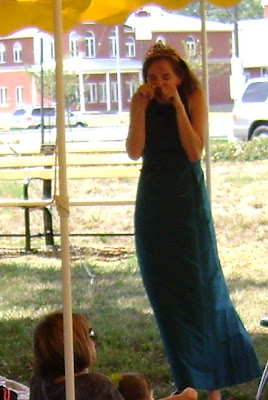 With temperatures over 100 degrees this summer, reading a good book in air conditioning has been a great alternative to playing outside.  Aidan Huffman, a participant in Willard Library’s “Beyond the Beanstalk” summer reading program said, “I read a lot and reading’s good for you.  Me and my sister had a competition and we both got tied.”


Rhonda Mort, Willard Children’s Librarian, said that there was good participation in their summer reading program.  Children participating in the “Beyond the Beanstalk” reading program were given a chance for a prize for every ten hours of reading.  On July 28 at the Grand Fabled Costume Ball, the  end of the summer reading program celebration, names were drawn from a jar.  The age appropriate prizes included T-Shirt, E- Monopoly, Horse ride, and Rock climbing.


Kids were encouraged to attend dressed as their favorite character.  There were well-known characters such as the adventurous Indiana Jones and a career-oriented yet dainty tooth fairy, as well as Fancy Nancy, who wore a multi-colored tutu and sparkly pink shoes.  For those of you not familiar, Fancy Nancy is a little girl character created by author Jane O’Connor who loves everything fancy:  clothes, accessories, decorations, furniture, and even fancy words.


When the storytelling finished, Mother Goose (Sara Murray) made an appearance.  She came with her Altrusa friends, who sponsored an essay and art contest, and later cooled everyone down by serving ice cream. ﻿﻿ 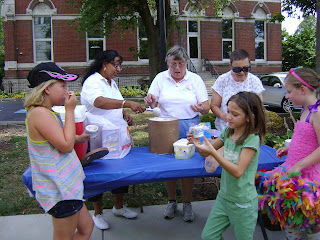 Sue Huck explained that Altrusa of Evansville is part of an international organization that supports literacy.   “Altrusa historically has been, and still is, a community service organization with a focus on literacy and other local needs”.

The subject of the essay contest was “Who Made a Difference in Evansville’s History?” in honor of Evansville’s 200th anniversary.   The contestants chose a wide variety of historical figures including Samuel McCutchan, Albert Wesselman, Christian Decker, Hugh McGary, and John Reitz.


In their essays, some contestants proudly stated their relationship to these historic Evansville figures.  The first place entry was by Jim McMurray who was awarded a Kindle, followed by Jack Buschkill, Chris Zimmerman, Melissa Bubb, and Tyler Zimmerman who won gift cards to Barnes & Noble bookstore.


The art contest theme was “Draw your favorite place in Evansville”.  Aubrie Madigan won first prize in the drawing contest and a basket of art supplies, and Nicole Hamilton placed second receiving a gift card from Dick Blicks.


Birdie Harrison mentioned a future Altrusa activity at Caze Elementary’s new multicultural library.  “Fifty multicultural books were donated to help bring awareness to the different cultures in our community.”   Members will be actively involved in the new Pre-K class this school year by establishing a book reading schedule and giving each pre- school child a free book. 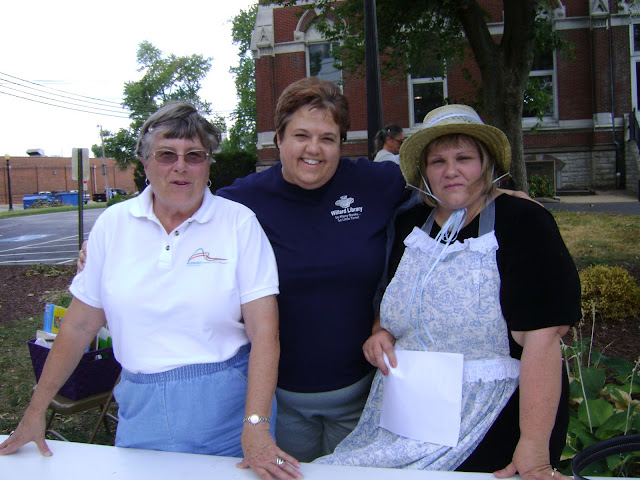 Posted by Altrusa International of Evansville by Lola Perkett at 1:23 PM No comments:


Bruce (my husband) and I flew into Melbourne and stayed at a hotel downtown where we flopped into bed.  It was a long flight, we were both tired and my ankles were swollen.  As soon as we had some sleep under our belts and food in our bellies, we were eager to explore.  The city of Melbourne was fun.  We found little shops and cafes down alleyways.  The people were friendly and spoke in their cool accents. I tasted Wallabee.  It doesn't taste like chicken.  There were parrots in the trees and tropical plants everywhere.

We went to Phillip Island.

Of course the ocean is always awe inspiring. It was sort of blustery and the sun was going down when we went to watch the penguins come in from the sea. The waves were dark and huge except for the striking white-cap at the top. These tiny Fairy Penguins (or called the Little Penguin) would suddenly appear and fight to get up on the beach so they could walk to their burrows. 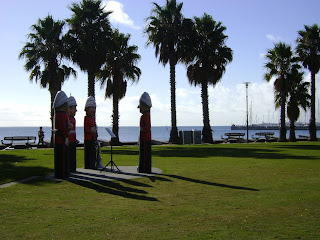 We stayed at a hotel in Geelong for a week because Bruce had business there in this city.  The park (pictured on the right) is located across the street from that hotel.  It was very peaceful in the park and the hotel was quite nice.  I did some reading and writing during this time.  Sometimes when we travel we are driven to go, go, go...  It's nice to take a break and breathe in the new surroundings.  Once Bruce was finished with his work, I was ready to go again. 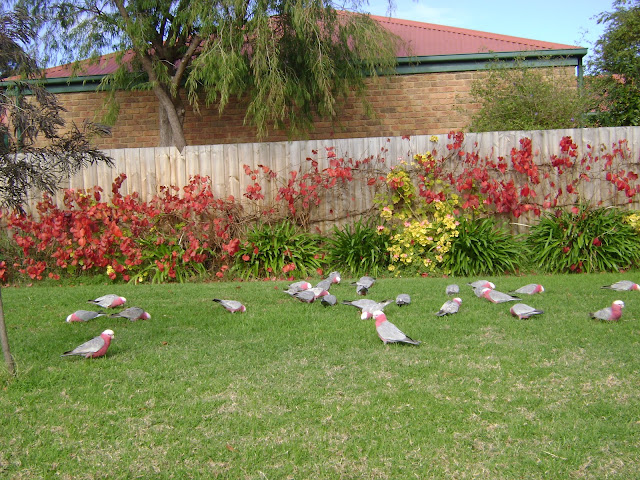 I was amazed to see a flock of parrots in someone's yard feeding on something.  We saw brightly colored parrots now and then throughout the trip--the kind we find in our pet stores.  One day when we were having lunch in a little cafe, we saw a flock of cockatoos in a tree. 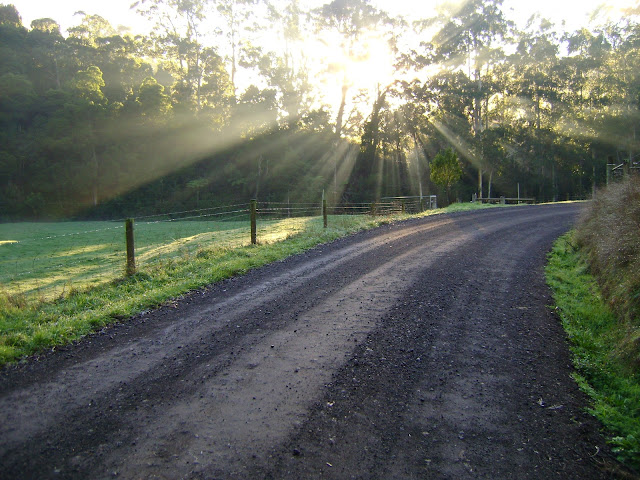 We stayed at a Bed and Breakfast near Apollo Bay.  This is the drive from their home. 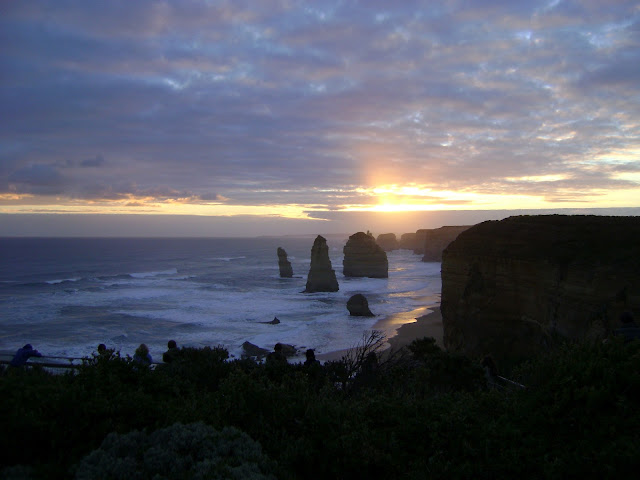 The Twelve Apostles off of Great Ocean Road 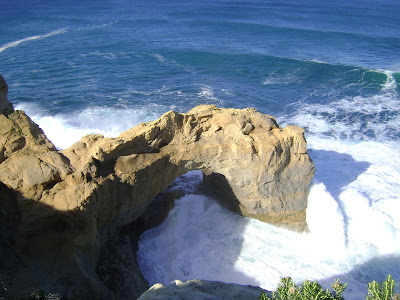 
Posted by Altrusa International of Evansville by Lola Perkett at 10:54 AM No comments: 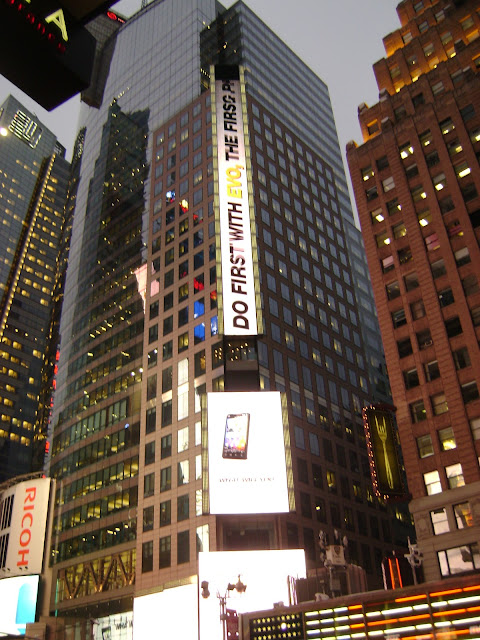 New York City has energy.  Lights are flashing; people are walking fast. Taxis, buses, cars, and bikes are moving along; everybody is going somewhere.  They're even doing it underground on the subway.   I understand what they mean when they say there is a New York City pace.  A person can't visit the city without feeling this rhythmical pulse beating underneath it all.

Broadway is amazing to see and experience.  The tall buildings with their brightly lit moving ads announce that exciting things are happening there.  And, of course, there is plenty going on. We stayed close enough to NBC so Bruce could get up in the morning, walk a short distance and be in the crowd outside the Today Show.

We saw two musicals: "The Jersey Boys" and "Godspell."  I enjoyed them both, but especially "The Jersey Boys."   "Godspell" was about the life of Christ;  the songs "Day By Day" and "Prepare Ye The Way" were familiar to us.   "Jersey Boys", on the other hand, was a mystery. We'd heard that the musical was good, but other than that we didn't know anything about it. As it turned out, it was about the life and times of "The Four Seasons." Their voices were close to the original group and the scenes were changed smoothly. It was excellent! I lost myself in the story.

Skating at the Rockefeller Center, walking through Central Park, and visiting the 911 Memorials were some of the other activities we chose to participate in. 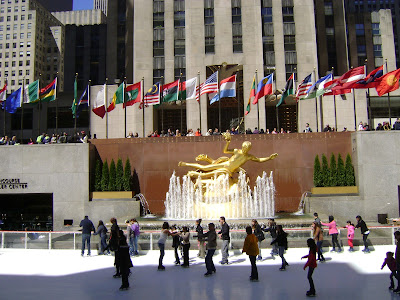 Posted by Altrusa International of Evansville by Lola Perkett at 7:53 PM No comments: 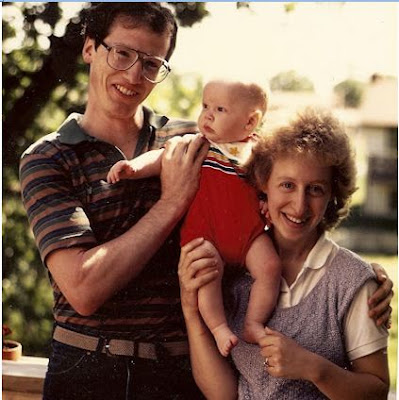 Today is January 7th.  This day means a lot to me because it is my first born's birthday.  HAPPY BIRTHDAY MATTHEW!

I dug up a couple pictures to share with everyone out there in internet land.  I want to share just how sweet and adorable he was as a wee little guy.  He still is sweet and adorable, of course, but there is something about being itty bitty and having all that baby fat that adds to the adorableness. 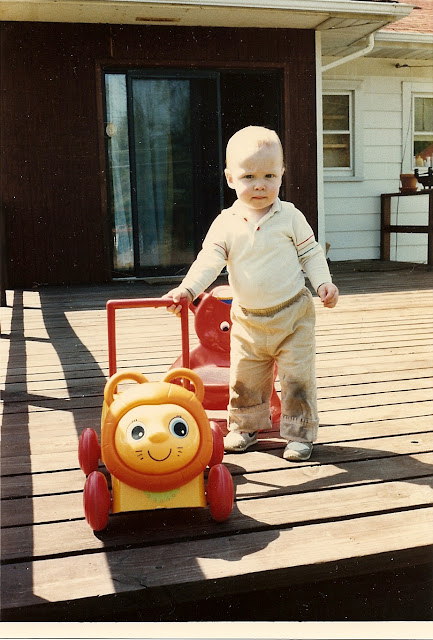 The Lion Rider was not a toy Matthew sat on-- he was much too busy to sit.  He had a world to learn about and he needed to roam and explore sort of like he's doing to this day.  Matthew loves to hikeand climb and learn.  He does these things well and we are very proud of him.

Posted by Altrusa International of Evansville by Lola Perkett at 6:39 PM No comments: 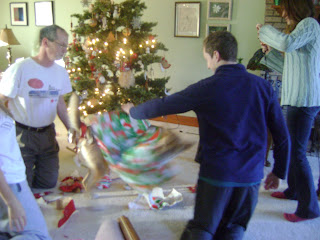 When there is a puppy involved, the wrapping paper becomes the best part of opening presents.  Come to think of it, my kids enjoyed playing with the Christmas paper when they were young too.  They'd pile it up, throw it in the air and run around with it.  They've been a little too old for that silliness for years now, but the puppy came and gave them an excuse to do it all over again.  The guy in blue is my son, Matthew.  He's working on his doctorate in physics.  Look how fast the dog appears to be going.  Someone in the physics world should study that---the Christmas Paper Frenzy... 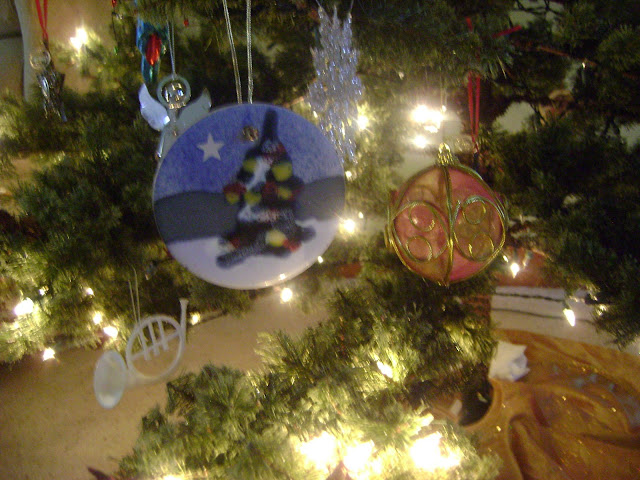 We had a wonderful Christmas 2011.  The kids are all grown up now and in their chosen fields of study.  My son is working on his doctorate in Physics, my oldest daughter is teaching Algebra I and Geometry, and our youngest is working toward her goal of Landscape Architecture.  Even though we are all in different places in life we can get together play family games, eat and reminisce.  There is one thing that I found that has to change for me personally, however.  The entire family is in excellent shape except for me.  We were thinking about family vacations and everyone wants to do climbing and hiking, etc.  That can't include me at this point being I'm completely out of shape.  Sooooo---I'm officially training for a family vacation.  Wish me luck! 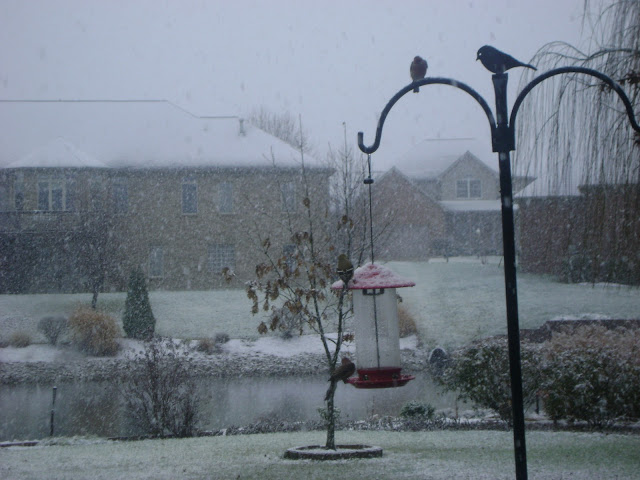 This scene out my back door was shortly after Christmas.  I woke up and saw snow coming down.  It's exciting to see snow!  I know everyone complains because of the slippery roads, but I think it's beautiful.  It brings up so many memories too.  Both my husband and I grew up in Minnesota where snow was not a rare sight.

I don't think the birds on our feeder are cardinals, but we did get cardinals shortly after this.  There were about eleven or twelve feeding on the ground and on this feeder.  Naturally when I crept up to take a picture they all flew away.  Talk about camera shy--they're worse than me!
Posted by Altrusa International of Evansville by Lola Perkett at 9:05 AM No comments: